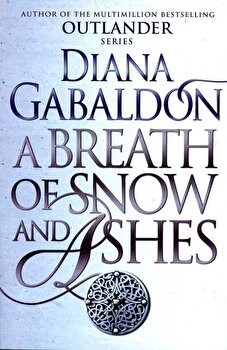 A Breath of Snow and Ashes/Diana Gabaldon


This is the sixth novel in the bestselling novel in the bestselling outlander series. The long fuse of rebellion has already been lit. It's 1772, the Royal Colony of North Carolina, and the governor calls upon Jamie Fraser to unite the back country and preserve the colony for King and Crown. One minor problem: Jamie Fraser's wife, Claire, is a time-traveller, as are his daughter and son-in-law. And Jamie knows that three years hence, the shot heard round the world will be fired, and the end of it all will be independence - with those loyal to the King either dead or in exile. Beyond present danger, though, looms the threat of a tiny clipping from the Wilmington Gazette, dated 1776, which reports the destruction of the house on Fraser's Ridge and the death by fire of James Fraser and all his family. For once, Jamie Fraser hopes the time-travellers in his family are wrong about the future. But only time will tell. Diana Gabaldon is the author of the international bestselling Outlander novels, which have recently been turned into a television drama by Sony Pictures. Released by Starz in the US in 2014, Season One (based on the first book in the series Outlander (previously published as Cross Stitch) is being hailed as the new Game of Thrones, and surpassed 5 million viewers in its first week, setting multiplatform viewing records in the process. After just one episode, the series was renewed for a second season (based on the second book in the series, Dragonfly in Amber). The films are hits in Australia too, and a UK broadcaster will be confirmed soon. Diana is also the author of the Lord John Grey novels, and lives with her husband and dogs in Scottsdale, Arizona.