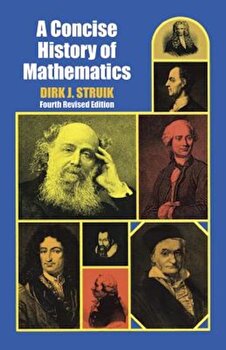 
This compact, well-written history -- first published in 1948, and now in its fourth revised edition -- describes the main trends in the development of all fields of mathematics from the first available records to the middle of the 20th century. Students, researchers, historians, specialists -- in short, everyone with an interest in mathematics -- will find it engrossing and stimulating. Beginning with the ancient Near East, the author traces the ideas and techniques developed in Egypt, Babylonia, China, and Arabia, looking into such manuscripts as the Egyptian Papyrus Rhind, the Ten Classics of China, and the Siddhantas of India. He considers Greek and Roman developments from their beginnings in Ionian rationalism to the fall of Constantinople; covers medieval European ideas and Renaissance trends; analyzes 17th- and 18th-century contributions; and offers an illuminating exposition of 19th century concepts. Every important figure in mathematical history is dealt with -- Euclid, Archimedes, Diophantus, Omar Khayyam, Boethius, Fermat, Pascal, Newton, Leibniz, Fourier, Gauss, Riemann, Cantor, and many others.For this latest edition, Dr. Struik has both revised and updated the existing text, and also added a new chapter on the mathematics of the first half of the 20th century. Concise coverage is given to set theory, the influence of relativity and quantum theory, tensor calculus, the Lebesgue integral, the calculus of variations, and other important ideas and concepts. The book concludes with the beginnings of the computer era and the seminal work of von Neumann, Turing, Wiener, and others. -The author's ability as a first-class historian as well as an able mathematician has enabled him to produce a work which is unquestionably one of the best.- -- Nature Magazine .

The Puzzle Universe: A History of Mathematics in 315 Puzzles, Hardcover/Ivan Moscovich

Physics for Scientists and Engineers, Hardcover/Raymond A. Serway

How to Fold It, Paperback/Joseph O'Rourke

How to Ace Calculus: The Streetwise Guide, Paperback/Colin Adams

The Math Book: From Pythagoras to the 57th Dimension, 250 Milestones in the History of Mathematics, Paperback/Clifford A. Pickover

Here's Looking at Euclid: From Counting Ants to Games of Chance - An Awe-Inspiring Journey Through the World of Numbers, Paperback/Alex Bellos