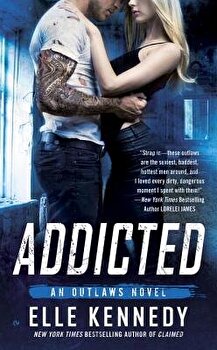 
From the New York Times bestselling author of Claimed comes the second enticingly erotic novel set in a world on the brink of chaos. Lennox used to live in a paradise on earth with his best friend Jamie, in a place where visitors came and went, allowing their desires to run free. But everything changes when a deadly attack forces them to take up with Connor Mackenzie's band of Outlaws. Lennox knows Jamie is hung up on someone else, but he's always believed he's the man for her--and won't let her go without a fight. Even though Jamie is well aware that Lennox is one hot specimen of a man, she refuses to let sex ruin the most important relationship in her life. But when the object of her interest spurns her, she indulges in a little pleasure-filled revenge with her very magnetic, very willing best friend. One thrilling night with Lennox is enough to awaken Jamie's unexpected desires for him. And now that she's had a taste, she's not sure she can ever give him up... About the Author: Elle Kennedy is the New York Times bestselling and RITA-nominated author of the Outlaws series, including Claimed , and the Killer Instincts series. She grew up in the suburbs of Toronto, Ontario, and holds a BA in English from York University. From an early age, she knew she wanted to be a writer and actively began pursuing that dream when she was a teenager. She loves strong heroines, alpha heroes, and just enough heat and danger to keep things interesting!