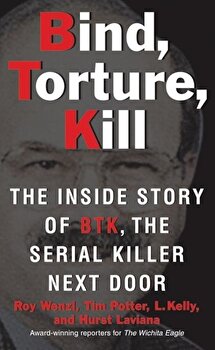 
Now that he's in prison, the whole world knows that Dennis Rader is BTK. But the intricate twists and shocking turns of this story have never before been told by the people who were there - and intimately acquainted with both the BTK killer and Rader the family man. "Bind, Torture, Kill: The Inside Story of the Serial Killer Next Door" takes readers behind closed doors, revealing the full and horrific tale as seen through the eyes of the killer, his victims, the investigators, and the reporters who covered it all. "Bind, Torture, Kill: The Inside Story of the Serial Killer Next Door" was written by four award-winning crime reporters for "The Wichita Eagle" who covered the story for over twenty years, and with the full cooperation - for the first time - of the Wichita Police Department's BTK Task Force.During the decades-long investigation, the police chief publicly declared that anyone giving information to the press would not only lose his job but be prosecuted; only now have members of the Task Force been given permission to talk.With hours of exclusive interviews with key Task Force members, including commander Kenny Landwehr, in-depth interviews with the families of victims, an interview with Jeff Rader, the notorious killer's brother, and over thirty years' worth of original reporters' notes, archival news stories, photos, documents, and material previously suppressed at the request of the police.

Have You Been Good', Paperback/Vanessa Nicolson

Gone 'Til November: A Journal of Rikers Island, Hardcover/Lil

A Tiger Among Us: A Story of Valor in Vietnam's a Shau Valley, Hardcover/Bennie G. Adkins

Boys in the Trees: A Memoir, Paperback/Carly Simon