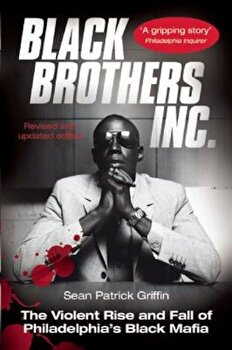 
Updated Edition, October 2007 "A gripping story. . . . Griffin richly documents the Black Mafia's organization, outreach and over-the-top badness."--"Philadelphia Inquirer" "Griffin's reporting on the Black Mafia and its interaction with law enforcement, the Nation of Islam and the Italian mob is fascinating."--"Philadelphia Weekly" "A confident chronicle of Philly's Black Mafia, the decades-long collaboration among drug dealers, Muslim clerics and local politicians."--"Philadelphia Magazine" "A richly detailed narrative of the murderous history of the city's first African-American crime syndicate."--"Philadelphia Daily News" "A great, sprawling epic."--Duane Swierczynski, editor-in-chief, "Philadelphia City Paper" "If you're a crime buff, a history lover, or if you just want something fascinating to read, it's a book you can't refuse."--Terri Schlichenmeyer, syndicated reviewer and host of www.BookWormSez.com "I couldn't put this book down."--Keith Murphy, award-winning broadcaster and host of "The Urban Journal" on XM Radio's The Power "Sean Patrick Griffin has given us a really extensive look into the Black Mafia . . . and has produced one of best pieces of research on the underworld . . . that I have ever seen."--Elmer Smith, "The Exchange," 1340AM WHAT "The book is incredible . . . amazing stuff."--Dom Giordano, radio host, 1210AM WPHT "Sean Patrick Griffin, in surreal detail, lays out the twist and turns, the political and religious associations . . . a guaranteed chilling read."--"The Melting Pot" "Searing, unrelenting and ruthlessly precise, a nose-in-the-bloodstains account of the violence that splattered black Philadelphia in the late 60s and early 70s."--Henry Schipper, producer of "Philly Black Mafia" in the "American Gangster" TV series The Black Mafia is one of the bloodiest crime syndicates in modern US history. From its roots in Philadelphia's ghettos in the 1960's, it grew from a rabble of street toughs to a disciplined, ruthless organization based on fear and intimidation. Known in its "legitimate" guise as Black Brothers Inc, it held regular meetings, appointed investigators, treasurers and enforcers, and controlled drug dealing, loan-sharking, numbers rackets, armed robbery and extortion. Its ferocious crew of gunmen was led by Sam Christian, the most feared man on Philly's streets. They developed close ties with the influential Nation of Islam and soon were executing rivals, extorting bookies connected to the city's powerful Cosa Nostra crew, and cowing local gangs. Police say the Black Mafia was responsible for over forty killings, the most chilling being the massacre of two adults and five children in a feud between rival religious factions. Despite the arrests that followed, they continued their rampage, exploiting their ties to prominent lawyers and civil rights leaders. Convictions and sentences eventually shattered their strength--only for the crack-dealing Junior Black Mafia to emerge in their wake. Author Sean Griffin, a former Philadelphia police officer turned university professor, conducted scores of interviews and gained access to informant logs, witness statements, wiretaps and secret FBI files to make "Black Brothers Inc." the most detailed account ever of an African American organized crime mob, and a landmark investigation into the modern urban underworld.