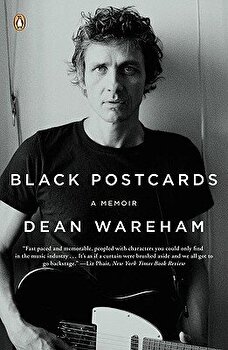 
A bewitching memoir about the lures, torments, and rewards of making and performing music in the indie rock world Dean Wareham's seminal bands Galaxie 500 and Luna have long been adored by a devoted cult following and extolled by rock critics. Now he brings us the blunt, heartbreaking, and wickedly charismatic account of his personal journey through the music world-the artistry and the hustle, the effortless success and the high living, as well as the bitter pills and self-inflicted wounds. It captures, unsparingly, what has happened to the entire ecosystem of popular music over a time of radical change, when categories such as "indie" and "alternative" meant nothing to those creating the music, but everything to the major labels willing to pay for it. Black Postcards is a must-have for Wareham's many fans, anyone who has ever been in a band, or the listeners who have taken an interest in the indie rock scene over the last twenty years. About the Author: Dean Wareham is a New Zealand musician and actor and the founder of the bands Galaxie 500, which he left in 1991, and Luna, which was re-formed in 2015. He is also a film composer, most notably composing the soundtrack to Noah Baumbach's The Squid and the Whale . In 2008 he published a memoir about his years in indie rock, entitled Black Postcards .

Down by the Bay, Hardcover/Raffi

Guns N' Roses: Use Your Illusion I and II, Paperback/Eric Weisbard

The Leschetizky Method: A Guide to Fine and Correct Piano Playing, Paperback/Malwine Bree

Meet Me in the Bathroom: Rebirth and Rock and Roll in New York City 2001-2011, Paperback/Lizzy Goodman

Notespeller for Piano, Book 2: A Visit to Piano Park with Spike and Party Cat, Paperback/Karen Harrington