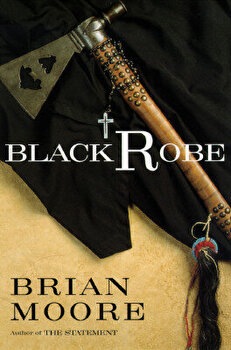 
His name is Father Laforgue, a young Jesuit missionary come from Europe to the New World to bring the word of God to the heathen. He is given minimal aid by the governor of the vast territory that is proudly named New France but is in reality still ruled by the Huron, Iroquois, and Algonkin tribes who have roamed it since the dawn of time and whom the French call Savages. His mission is to reach and bring salvation to an isolatied Huron tribe decimated by disease in the far north before incoming winter closes off his path to them. His guides are a group of Savages who mock his faith and their pledges even as they accept muskets as their payment. Father Laforgue is about to enter a world of pagan power and sexual license, awesome courage and terrible cruelty, that will test him to the breaking point as both a man and a priest, and alter him in ways he cannot dream. In weaving a tautly suspenseful tale of physical and spiritual adventure in a wilderness frontier on the cusp of change, Brian Moore has written a novel that rivals Joseph Conrad's Heart of Darkness in its exploration of the confrontation between Western ideology and native peoples, and its meditation upon Good and Evil in the human heart. About the Author: Brian Moore is the author of nineteen novels, including The Statement , No Other Life , Lies Of Silence and The Lonely Passion Of Judith Hearne . Mr. Moore was short-listed three times for Britain's Booker Prize. He passed away in 1999.