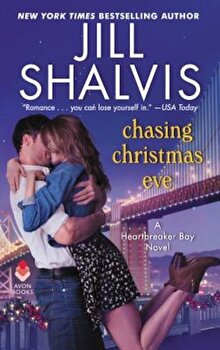 
A RT Book Reviews Top Pick ( A standalone Heartbreaker Bay novel) Meet cute... Run for the hills--temporarily . That's Colbie Albright's plan when she flees New York for San Francisco. Wrangling her crazy family by day and writing a bestselling YA fantasy series by night has taken its toll. In short, Colbie's so over it that she's under it. She's also under the waters of a historic San Francisco fountain within an hour of arrival. Fortunately, the guy who fishes Colbie out has her looking forward to Christmas among strangers. But she's pretty sure Spencer Baldwin won't be a stranger for long. Make merry... Spence's commitment to hiding from the Ghosts of Relationships Past means he doesn't have to worry about the powerful--okay, crazy hot--chemistry he's got with Colbie. Just because she can laugh at anything, especially herself... just because she's gorgeous and a great listener...just because she ``gets`` Spence immediately doesn't mean he won't be able to let Colbie go. Does it? ...and hope for a miracle. Now the clock's ticking for Colbie and Spence: Two weeks to cut loose. Two weeks to fall hard. Two weeks to figure out how to make this Christmas last a lifetime.