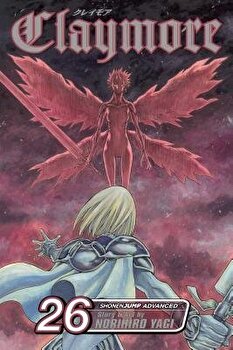 
In a world where monsters called Yoma prey on humans and live among them in disguise, humanity's only hope is a new breed of warrior known as Claymores. Half human, half monster, these silver-eyed slayers possess supernatural strength but are condemned to fight their savage impulses or lose their humanity completely. Former Claymores Cassandra and Priscilla appear to be headed toward an epic conflict, as the warriors protecting the Holy City of Rabona attempt to orchestrate a battle between these two savage elements in order to avert complete annihilation. However, when Clare and Raki step in, the Awakened Ones' fury is redirected toward them About the Author: Norihiro Yagi won the 32nd Akatsuka Award for his debut work, UNDEADMAN, which appeared in Monthly Shonen Jump magazine and produced two sequels. His first serialized manga was his comedy Angel Densetsu (Angel Legend), which appeared in Monthly Shonen Jump from 1992 to 2000. His epic saga, Claymore, is running in Monthly Jump Square magazine.