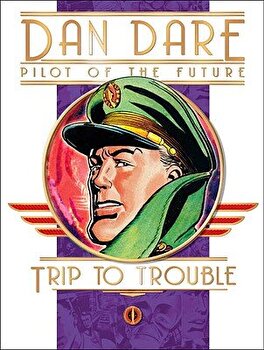 
It's chocks away once again as Dan Dare, Pilot of the Future, returns First published in classic British comic Eagle , this is perhaps the most seminal adventure of one of Britain's best-loved characters, presented in a gorgeous library edition. Following their abduction by brilliant Scottish scientist Galileo McHoo during Safari in Space , Dan and co have used his incredible spacecraft, the Galactic Galleon, to reach the mysterious Terra Nova -- last known destination of Dan's test pilot father But when the gang stumbles into a war between the strange inhabitants of this world, will they survive to learn the truth? Packed with beautiful artwork from legendary Dare creator Frank Hampson, and his successor, acclaimed artist Frank Bellamy. About the Author: Frank Hampson was perhaps best known as the creator and original artist for Dan Dare , but he also illustrated a number of children's books for Ladybird. Frank Bellamy worked on Dan Dare and The Eagle with Frank Hampson and is also well known for his work on the Thunderbirds and Captain Scarlet and the Mysterons for TV Century 21 in the 1970s.

The Wild Boys: A Book of the Dead, Paperback/William S. Burroughs

Black Bullet, Vol. 1 (Light Novel): Those Who Would Be Gods, Paperback/Shiden Kanzaki

The Dragon, the Witch, and the Railroad, Paperback/Elizabeth Ann Scarborough

Shoot Like a Girl: A Post-Apocalyptic Thriller, Paperback/L. L. Akers

The Future of Another Timeline, Hardcover/Annalee Newitz