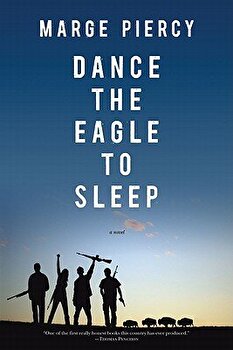 
Description Originally published in 1970, Marge Piercy's second novel follows the lives of four teenagers in a near-future society as they rebel against a military draft and "the system." The occupation of Franklin High School begins, and with it, the open rebellion of America's youth against their channeled, unrewarding lives and the self-serving, plastic society that directs them. From the disillusionment and alienation of the young at the center of the revolt to their attempts to build a visionary new society, the nationwide following they gain, and the brutally complete repression that inevitably follows, this is a future fiction without a drop of fantasy. As driving, violent, and nuanced today as it was 40 years ago, this anniversary edition includes a new introduction by the author reflecting unapologetically on the novel and the times from which it emerged. About the Author Marge Piercy is the author of 17 novels, including the bestselling Braided Lives , Gone to Soldiers , and Woman on the Edge of Time ; numerous volumes of poetry; and a critically acclaimed memoir, Sleeping with Cats . She is the recipient of four honorary doctorates and has been a key player in many of the major progressive political battles of our time. She lives in Wellfleet, Massachusetts.

Hairstyles of the Damned, Paperback/Joe Meno

The 120 Days of Sodom and Other Writings, Paperback/Marquis De Sade

The Conductor and Other Tales, Paperback/Jean Ferry

One Day in the Life of Ivan Denisovich, Paperback/Aleksandr Solzhenitsyn

Talking to My Body/Anna Swir

William Stoner and the Battle for the Inner Life: Bookmarked, Paperback/Steve Almond

Please Read This Leaflet Carefully: Keep This Leaflet. You May Need to Read It Again., Paperback/Karen Havelin

Things I Don't Want to Know: On Writing, Paperback/Deborah Levy