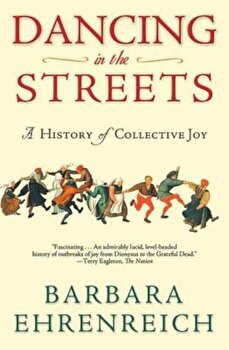 Dancing in the Streets: A History of Collective Joy, Paperback/Barbara Ehrenreich


"Fascinating . . . An admirably lucid, level-headed history of outbreaks of joy from Dionysus to the Grateful Dead."--Terry Eagleton, The Nation Widely praised as "impressive" (The Washington Post Book World), "ambitious" (The Wall Street Journal), and "alluring" (The Los Angeles Times), Dancing in the Streets explores a human impulse that has been so effectively suppressed that we lack even a term for it: the desire for collective joy, historically expressed in revels of feasting, costuming, and dancing. Drawing on a wealth of history and anthropology, Barbara Ehrenreich uncovers the origins of communal celebration in human biology and culture. From the earliest orgiastic Mesopotamian rites to the medieval practice of Christianity as a "danced religion" and the transgressive freedoms of carnival, she demonstrates that mass festivities have long been central to the Western tradition. In recent centuries, this festive tradition has been repressed, cruelly and often bloodily. But as Ehrenreich argues in this original, exhilarating, and ultimately optimistic book, the celebratory impulse is too deeply ingrained in human nature ever to be completely extinguished.