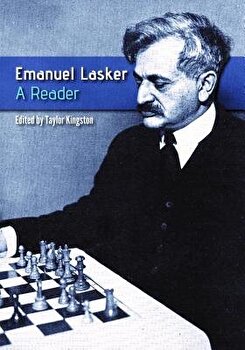 
Description A Zeal to Understand "I do not accept an absolute limit to my knowledge. I have a zeal to understand that refuses to die." -- Emanuel Lasker, 1919 Among great chess masters, Emanuel Lasker (1868-1941) stands unique for the depth and broad scope of his intellect. Most of the game's world champions have been single-mindedly chess-obsessed, with few outside interests. Lasker, however, was very much a polymath, making major contributions to mathematics and philosophy, plus writing on many other subjects: science, politics, economics, sociology, board games other than chess, etc. All while retaining his chess crown for nearly 27 years, and ranking among the world's top ten for over four decades. In this book you get a unique look at Lasker himself - both intellectually and emotionally - through a wide-ranging sampling of his works, with an emphasis on chess but also including much on other topics. A partial list: -Lasker's magazine London Chess Fortnightly (1892-93). -The Hastings 1895 tournament book. -Common Sense in Chess (1896). -Lasker's Chess Magazine (1904-1909). -A memorial tribute to Pillsbury, from The Chess Player's Scrapbook (1906). -Full coverage of the 1907 Lasker-Marshall and 1908 Lasker-Tarrasch World Championship matches. -The St. Petersburg 1909 tournament book. -Lasker's and Capablanca's books on their 1921 title match. -The discussion of the theory of Steinitz from Lasker's Manual of Chess. -An examination of Lasker's endgame instruction and studies by GM Karsten M ller. -Summaries of and extensive excerpts from two of Lasker's philosophical works, Struggle (1907) and Die Philosophie des Unvollendbar (The Philosophy of the Unattainable, 1919), and his forgotten sociological rarity, The Community of the Future (1940). -A discussion of Lasker's mathematical works by Dr. Ingo Alth fer of Jena University. -A look at Lasca, a checkers-like game invented by Lasker. You are invited to enter the mind of this wide-ranging, insightful and outspoken intellect. Lasker was not always right, any more than he always won at the chess board, but he was always interesting. About the Editor Taylor Kingston has been a chess enthusiast since his teens. He holds a Class A over-the-board USCF rating, and was a correspondence master in the 1980s, but his greatest love is the game's history. His historical articles have appeared in Chess Life, New In Chess, Inside Chess, Kingpin among others.

The Everything Giant Book of Word Searches, Volume 5: Over 300 Word Search Puzzles for Hours of Challenging Fun!, Paperback/Charles Timmerman

The Complete Book of Mah Jongg: An Illustrated Guide to the Asian, American and International Styles of Play, Paperback/Amy Lo

The Logic of Failure: Recognizing and Avioding Error in Complex Situations, Paperback/Dietrich Dorner

How to Become a Federal Criminal: An Illustrated Handbook for the Aspiring Offender, Hardcover/Mike Chase

A Week at the Airport, Paperback/Alain De Botton