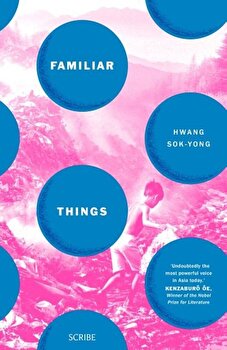 
Seoul. On the outskirts of South Korea's glittering metropolis is a place few people know about: a vast landfill site called Flower Island. Home to those driven from the city by poverty, is it here that 14-year-old Bugeye and his mother arrive, following his father's internment in a government 're-education camp'. Living in a shack and supporting himself by weeding recyclables out of the refuse, at first Bugeye's life on Flower Island is hard. But then one night he notices mysterious lights around the landfill. And when the ancient spirits that still inhabit the island's landscape reveal themselves to him, Bugeye's luck begins to change - but can it last? Vibrant and enchanting, Familiar Things depicts a society on the edge of dizzying economic and social change, and is a haunting reminder to us all to be careful of what we throw away.