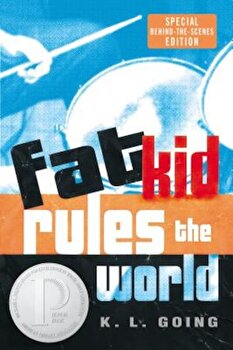 
A Michael L. Printz Honor Book Troy Billings is seventeen, 296 pounds, friendless, utterly miserable, and about to step off a New York subway platform in front of an oncoming train. Until he meets Curt MacCrae, an emaciated, semi-homeless, high school dropout guitar genius, the stuff of which Lower East Side punk rock legends are made. Never mind that Troy s dad thinks Curt s a drug addict and Troy s brother thinks Troy s the biggest (literally) loser in Manhattan. Soon, Curt s recruited Troy as his new drummer even though Troy can t play the drums. Together, Curt and Troy will change the world of punk, and Troy s own life, forever. "Troy's voice is candid, irreverent, realistic and humorous.A] wonderful, engrossing tale." SLJ An ALA BBYA ABCCBBlue Ribbon Book ABooklistEditors' Choice AnSLJBest Book of the Year AMiami HeraldBest Book of the Year "

The Iridescence of Birds: A Book about Henri Matisse, Hardcover/Patricia MacLachlan

I Wish I Had a Pet, Hardcover/Maggie Rudy

Exploring Space: From Galileo to the Mars Rover and Beyond, Hardcover/Martin Jenkins

My First Book about the Qur'an, Hardcover/Sara Khan

Jesus Wants All of Me: Based on the Classic Devotional My Utmost for His Highest, Hardcover/Phil A. Smouse

Let's Do Nothing!, Paperback/Tony Fucile