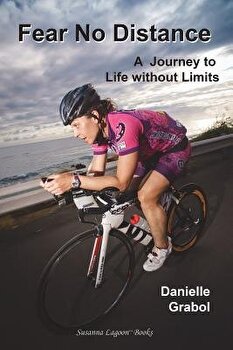 Fear No Distance: A Journey to Life Without Limits, Paperback/Danielle Grabol


During a routine physical in 2004, Danielle Grabol was given an ultimatum: get your act together and lose weight or prepare yourself for a bleak future. Losing her breath while walking up a flight of stairs, Danielle realized that her health was on a downward spiral...and it was time to make a serious lifestyle change. Danielle's journey wasn't easy. After losing nearing 70 pounds via a complete diet overhaul, she discovered her one true passion--riding bikes. While on a training ride in Panama City Beach, Florida, Danielle was hit by a car and broke her leg. Doctors warned her that her multisport days were likely over. In Fear No Distance Grabol opens up about overcoming her injuries and discovering the world of long-distance triathlon and ultra-cycling racing. Her story is one of incredible grit and determination. From Race Across America to a 281.2-mile double Anvil triathlon, Grabol continued to raise the bar for her racing. Shattering the stereotypes of women in ultra-triathlon, Grabol became the first woman to compete in the EPIC5 triathlon. In five days, she completed five Ironman-distance triathlons, each on a different Hawaiian island. Fear No Distance is a story of becoming comfortable being uncomfortable and will challenge you to dream big and let go of limitations.

10,000 Things You Need to Know: The Big Book of Lists, Hardcover/Elspeth Beidas

Weaving on the 2ft Square Loom: A Collection of Plaids, Paperback/Ashli Couch

9 Simple Tips and Strategies for Winning the Pick 3 Cash 4 Lottery Games: The Definitive Guide for Learning the Mathematics of Random/S. B. I. P. 999

Become an Automobile Expert a Do It Yourself Guide to Cars 1st Edition: How to Buy, Inspect, Maintain, Troubleshoot and Fix the Most Common Problems i, Paperback/Alan Adran Delfin Cota

Unsinkable: How to Build Plywood Pontoons and Longtail Boat Motors Out of Scrap, Paperback/Robnoxious

Bully Busters and Beyond: 9 Treasures to Self-Confidence, Self-Esteem, and Strength of Character, Paperback/Phil Nguyen

Why Will No One Play with Me?: The Play Better Plan to Help Children of All Ages Make Friends and Thrive, Hardcover/Caroline Maguire