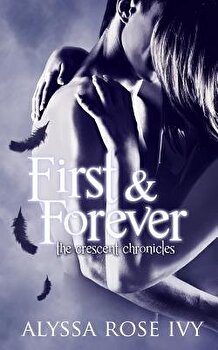 
Description Ever wonder what Levi was thinking in FLIGHT? Find out in the two Levi POV novellas FIRST & FOREVER. This combined edition includes both FIRST (previously released) and FOREVER, a brand new novella. This edition also includes the bonus short story: The Royal Wedding. FIRST Levi's got it all. He's a paranormal prince with more money and power than he knows what to do with, but something is missing--a mate. He only has until college graduation to find her. Allie's perfect but she wants nothing to do with him. When attraction becomes something more, will he take a chance and show her who he really is or will he lose everything? FOREVER Levi's almost out of time. Allie's the one, he knows it in every grain of his being, but how can he make her see it? Desperate to keep Allie safe and at his side, he takes the biggest risk of his life. Reckless or not there is nothing he wouldn't do to keep her with him... forever. About the author Alyssa Rose Ivy is a bestselling New Adult and Young Adult author who loves to weave stories with romance and humor. Although raised in the New York area, she fell in love with the South after moving to New Orleans for college. After surviving law school and earning her masters in library science, she turned back to her creative side and decided to write. She lives in North Carolina with her husband and two young children, and she can usually be found with a cup of coffee in her hand. Series by Alyssa Rose Ivy: - The Crescent Chronicles - The Empire Chronicles - Clayton Falls - The Hazards Series - The Mixology Series - The Afterglow Trilogy - The Dire Wolves Chronicles Visit me on the web at: http: //www.alyssaroseivy.com www.facebook.com/AlyssaRoseIvy twitter.com/#!/AlyssaRoseIvy Sign up for my new release newsletter: http: //eepurl.com/ktlSj