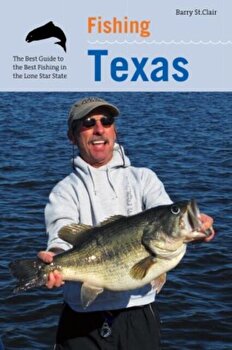 
This book provides anglers with a useful reference for the best places to fish in Texas, describing the necessary particulars that give each site its own character and reputation as well asthe dominate species and ecological zones where they are found. T About the Author Barry St. Clair is an avid outdoorsman who has been a farmer, rancher, fisheries technician, outdoor outreach specialist, freelance outdoor writer, columnist for Texas Fish and Game magazine, and outdoor columnist for the Athens Daily Review, Corsicana Daily Sun, and Palestine Herald Press in Texas. He credits his addiction to fishing to his parents who took him on many outdoor family adventures all over the western United States. Barry grew up in Central California and graduated from California Polytechnic State University in San Luis Obispo, California with a B.S. degree in Natural Resource Management. He moved to Texas in 1980 and has hunted and fished across the state for the past 28 years. In 1992 he caught the Texas state record largemouth bass that weighed 18.18 pounds from Lake Fork. That record still stands. He particularly enjoys fishing for striped and hybrid striped bass in the many Texas lakes where they have been stocked. Barry and his wife and two children reside in Athens, Texas.

A Spotter's Guide to Countryside Mysteries. From Piddocks and Lynchets to Witch's Broom, Main, Hardback/John Wright

The Soul of Place: A Creative Writing Workbook: Ideas and Exercises for Conjuring the Genius Loci, Paperback/Linda Lappin

Atlas. A pocket guide to the world today. 6th Edition/***