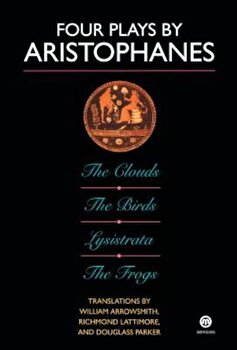 Four Plays by Aristophanes: The Birds; The Clouds; The Frogs; Lysistrata, Paperback/Aristophanes


Whether his target is the war between the sexes or his fellow playwright Euripides, Aristophanes is the most important Greek comic dramatist--and one of the greatest comic playwrights of all time. His writing--at once bawdy and delicate--brilliantly fuses serious political satire with pyrotechnical bombast, establishing the tradition of comedy as high art. His messages are as timely and relevant today as they were in ancient Greece, and his plays still provoke laughter--and thought. This volume features four celebrated masterpieces: Lysistrata, The Frogs, The Birds, and The Clouds , translated by three of the most distinguished translators and classicists of our time.

The Misanthrope and Tartuffe, by Moliere, Paperback/Richard Wilbur

Waiting for Godot: A Bilingual Edition: A Tragicomedy in Two Acts, Hardcover/Samuel Beckett

Lady in the Van, Hardcover/Alan Bennett

Rosencrantz and Guildenstern Are Dead - A Play, Paperback/Tom Stoppard

Plays One. the Dark River, After October, Paperback/Rodney Ackland

Death of a Salesman, Paperback/Arthur Miller

An Enemy of the People, Paperback/Henrik Ibsen