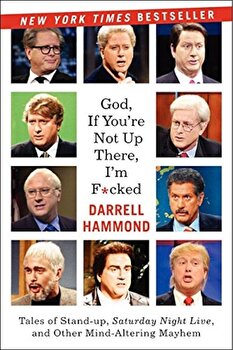 God, If You're Not Up There...: Tales of Stand-Up, Saturday Night Live, and Other Mind-Altering Mayhem, Paperback/Darrell Hammond


Tina Fey's Bossypants meets David Carr's The Night of the Gun in Darrell Hammond'sgroundbreaking memoir, God, If You're Not Up There, I'm F*cked --a raw look inside the troubled life and mind of anAmerican comic genius. By turns poignant and hilarious, Hammond takes readersfrom the set of Saturday Night Live , where he was the show'slongest-tenured cast member, to the drug-ridden streets of Harlem and into thetwisting corridors of his own unflaggingly humorous consciousness. Minglingbehind-the-scenes stories from television's best-loved comedy series with adark look inside a world-class funnyman, God If You're Not Up There, I'm F*cked is a book sure to resonate with anyonewho shares a talent for performance, a love of comedy, or a desire to know howan artist can climb from the deepest despair to the very top of his profession.

Spoken from the Heart, Hardcover/Laura Bush

Everybody's Got Something, Paperback/Robin Roberts

Death in the City of Light: The Serial Killer of Nazi-Occupied Paris, Paperback/David King

Sum It Up: 1098, a Couple of Irrelevant Losses, and a Life in Perspective, Paperback/Pat Head Summitt

Nightingale Tales: Stories from My Life as a Nurse, Paperback/Lynn Dow RN

Kennedy and King: The President, the Pastor, and the Battle Over Civil Rights, Paperback/Steven Levingston

Singing in the Wilderness, Paperback/Luana Stoltenberg

Life Would Be Perfect If I Lived in That House, Paperback/Meghan Daum

The Woman Who Fooled the World: Belle Gibson's Cancer Con, and the Darkness at the Heart of the Wellness Industry, Paperback/Beau Donelly

My Grandfather Would Have Shot Me: A Black Woman Discovers Her Family's Nazi Past, Paperback/Jennifer Teege

A Woman Looking at Men Looking at Women: Essays on Art, Sex, and the Mind, Paperback/Siri Hustvedt

The Hard Way on Purpose: Essays and Dispatches from the Rust Belt, Paperback/David Giffels

The First Muslim: The Story of Muhammad, Paperback/Lesley Hazleton