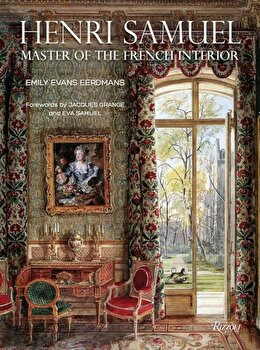 
The first book dedicated to Henri Samuel, considered one of the best French interior designers of the twentieth century and acclaimed for his mastery of historic design, as well as his eye for contemporary presentation and furnishings--a high-point addition to Rizzoli's continuing coverage of the masters of the field. Design legend Henri Samuel believed that a successful interior was one in which an observer never suspected that a decorator had been involved. This book takes the reader inside some of Samuel's groundbreaking and inspiring interiors, beginning with his first job assisting St phane Boudin of Jansen in the 1920s through postwar Paris society and into the go-go '80s. During his illustrious career, Samuel created rarefied and beautiful environments for his jet-set clientele--Doris Duke, Prince Sadruddin Aga Khan, Susan and John Gutfreund, Valentino Garavani, and multiple Rothschilds and Vanderbilts. Such was his expertise that museums such as Versailles and the Metropolitan Museum of Art consulted him on the installation of period rooms. Samuel was a master at reproducing intimate spaces in various historic styles in addition to mixing those styles in an erudite way: modernist paintings were installed over Empire consoles, Louis XIII furniture shared space with Oriental objects, neoclassical chairs were placed beside tables of brass and Plexiglas. This book records Samuel's life, his career, and the luxurious interiors he created for his clients and himself--rooms that look as fresh and alive today as they did when they were first arranged. It is a necessary addition to any design library.

Bobbi Brown Makeup Manual: For Everyone from Beginner to Pro, Hardcover/Bobbi Brown

Bobbi Brown Makeup Manual: For Everyone from Beginner to Pro, Paperback/Bobbi Brown

Getting Real about Getting Older: Conversations about Aging Better, Paperback/Linda Stroh

Everyday Fashions of the Forties as Pictured in Sears Catalogs, Paperback/JoAnne Olian

The Truth about Style, Paperback/Stacy London

The Bee Cottage Story: How I Made a Muddle of Things and Decorated My Way Back to Happiness, Hardcover/Frances Schultz

Writing Fiction for All You're Worth, Paperback/James Scott Bell

Esquire the Biggest Black Book Ever: A Man's Ultimate Guide to Life and Style, Hardcover/Esquire

Joy of Living with Less. How to Downsize to 100 Items and Liberate Your Life, Hardback/Mary Lambert

The Book of Hygge: The Danish Art of Contentment, Comfort, and Connection, Hardcover/Louisa Thomsen Brits

Modern Gentleman. The Guide to the Best Drinks, Food, and Accessories, Hardback/John McCarthy