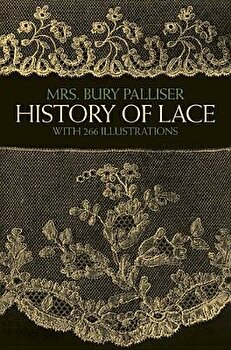 
Lace as we know it today developed prior to the sixteenth century from the drawn work, cutwork, and lacis (darning on squares of net) that evolved out of centuries of embroidery and needlework. Traces of elaborate netting have been found in the tombs of ancient Egypt; the Bible mentions "fine twisted linen wrought with needlework"; and centuries-old Scandinavian burial chambers have yielded fragments of gold lace. This definitive history of lace-making is a landmark of nineteenth-century erudition and scholarship that has never been surpassed for its wide learning and comprehensive treatment of the subject. The third edition of the work, published in 1875, was substantially revised and enlarged in 1901, with much new material on the laces of Italy, England, Ireland, Crete, and Sicily. Nearly 100 new illustrations were added to show different fashions of wearing lace. This fourth edition, published in the United States in 1911, is reprinted here complete and unabridged. Combining meticulous research with a concise, readable style, Mrs. Palliser traces the history and development of lace-making in Italy, Greece, Spain, Portugal, Flanders, France, England, Scotland, Ireland, and other lands. Quoting extensively from the literature of the day, the author outlines the evolution of reticella, a Venetian lace based on geometric forms; the light and flowery point de France ; Valenciennes, a fine diamond-meshed lace much used for trimming and ruffles, Chantilly, a delicate mesh with ornate patterns; point d'Espagne, made with gold and silver threads; and many other varieties. In addition to detailing the development of the lace itself, Mrs. Palliser acquaints us with the social, cultural, and economic conditions that affected its manufacture. Over 90 photographs and 173 prints and line drawings depict dozens of different laces and their use in collars, ruffs, handkerchiefs, aprons, fans, mantillas, petticoats, masks, mantles, and ecclesiastical garments. Many of the illustrations have been enlarged to show details of stitching. History of Lace is a book that belongs in the library of every needleworker as well as among the reference books of costume and cultural historians. It is a comprehensive, anecdotal, and profusely illustrated chronicle of an age-old art that has adorned and embellished the clothing and accoutrements of mankind since earliest times.

Pete the Cat and His Four Groovy Buttons 14.5" Puppet/James Dean

Who Said That?. Take the Quote Quiz Challenge, Paperback/Owen Frank

The Advent Coloring Calendar: A Coloring Book to Bless and De-Stress Through the Season, Paperback/Paraclete Press

Boulangeries and Bicycles: A Cycling Adventure in Europe, Paperback/Steven Herrick

How We Eat with Our Eyes and Think with Our Stomach: The Hidden Influences That Shape Your Eating Habits, Hardcover/Melanie Muhl