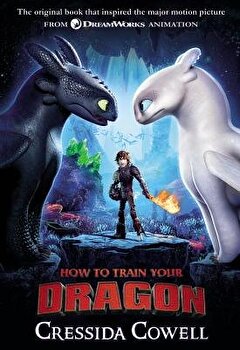 
A young Viking boy goes on an adventure with Toothless, his mischievous dragon, in the New York Times bestselling book that inspired the hit movie trilogy Action-packed, hilarious, and perfectly illustrated, How to Train Your Dragon is a beloved modern classic with millions of fans across the globe. This edition features cover art from the Dreamworks film How to Train Your Dragon: The Hidden World and bonus excerpts from other exciting books by Cressida Cowell. In the book that started it all, Hiccup Horrendous Haddock III, the quiet and thoughtful son of the Chief of the Hairy Hooligans, tries to pass the important initiation test of his Viking clan by catching and training a dragon. Can Hiccup do it without being torn limb from limb? Join his adventures and misadventures as he finds a new way to train dragons--and becomes a hero. The original book that inspired the hit movie trilogy from DreamWorks]--abouta young Viking boy, his mischievous dragon Toothless, and their adventure--isreissued with new cover art. new cover art. About the Author: Cressida Cowell is the #1 internationally bestselling author and illustrator of the How to Train Your Dragon and Wizards of Once series. She grew up in London and on a small, uninhabited island off the west coast of Scotland, where she spent her time writing stories, fishing for things to eat, and exploring the island. She now lives in Hammersmith, England, with her husband, three children, and a dog named Pigeon.