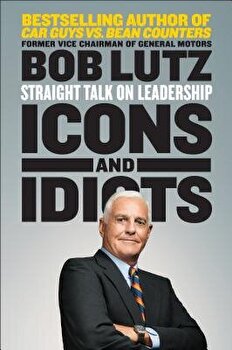 
When Bob Lutz retired from General Motors in 2010, after an unparalleled forty-seven-year career in the auto industry, he was one of the most respected leaders in American business. He had survived all kinds of managers over those decades: tough and timid, analytical and irrational, charismatic and antisocial, and some who seemed to shift frequently among all those traits. His experiences made him an expert on leadership, every bit as much as he was an expert on cars and trucks. Now Lutz is revealing the leaders--good, bad, and ugly--who made the strongest impression on him throughout his career. Icons and Idiots is a collection of shocking and often hilarious true stories and the lessons Lutz drew from them. From enduring the sadism of a Marine Corps drill instructor, to working with a washed-up alcoholic, to taking over the reins from a convicted felon, he reflects on the complexities of all-too-human leaders. No textbook or business school course can fully capture their idiosyncrasies, foibles and weaknesses - which can make or break companies in the real world. Lutz shows that we can learn just as much from the most stubborn, stupid, and corrupt leaders as we can from the inspiring geniuses. He offers fascinating profiles of icons and idiots such as... Eberhard von Kuenheim . The famed CEO of BMW was an aristocrat-cum-street fighter who ruled with secrecy, fear, and deft maneuvering. Harold A. "Red" Poling A Ford CEO and the ultimate bean counter. If it couldn't be quantified, he didn't want to know about it. Lee Iacocca The legendary Chrysler CEO appeared to be brillant and bold, but was often vulnerable and insecure behind the scenes. G. Richard "Rick" Wagoner The perfect peacetime CEO whose superior intelligence couldn't save GM from steep decline and a government bailout. As Lutz writes: We'll examine bosses who were profane, insensitive, totally politically incorrect, and who "appropriated" insignificant items from hotels or the company. We'll visit the mind of a leader who did little but sit in his office. We'll look at another boss who could analyze a highly complex profit-and-loss statement or a balance sheet at a glance, yet who, at times, failed to grasp the simplest financial mechanisms--how things actually worked in practice to create the numbers in the real world. The result is a powerful and entertaining guide for any aspiring leader. About the Author: Bob Lutz had a legendary 47-year career as one of the most respected "car guys" in history. He held senior leadership positions at four of the world's leading automakers--GM, Ford, Chrysler, and BMW. He was most recently the vice chairman of General Motors from 2001 to 2010, the years leading up to and through GM's bankruptcy. He is the bestselling author of Guts: 8 Laws of Business from One of the Most Innovative Business Leaders of Our Time and Car Guys vs. Bean Counters: The Battle for the Soul of American Business.

So Good They Can't Ignore You: Why Skills Trump Passion in the Quest for Work You Love, Hardcover/Cal Newport

We the Corporations: How American Businesses Won Their Civil Rights, Hardcover/Adam Winkler

The Weekly Coaching Conversation: A Business Fable about Taking Your Team's Performance-And Your Career-To the Next Level, Hardcover/Brian Souza

Hbr's 10 Must Reads on Managing in a Downturn (with Bonus Article "reigniting Growth" by Chris Zook and James Allen), Paperback/Harvard Business Review

Influential Classics Collection: The Republic and The Prince, Hardback/Tom Butler-Bowdon

On Becoming a Leader, Paperback/Warren Bennis

The Alliance: Managing Talent in the Networked Age, Hardcover/Reid Hoffman

Letters from Leaders: Personal Advice for Tomorrow's Leaders from the World's Most Influential People, Hardcover/Henry Dormann

The Trump Card: Playing to Win in Work and Life, Paperback/Ivanka Trump

Make Your Job a Calling: How the Psychology of Vocation Can Change Your Life at Work, Paperback/Bryan J. Dik

How Successful People Lead: Taking Your Influence to the Next Level, Hardcover/John C. Maxwell