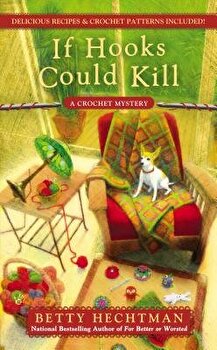 If Hooks Could Kill/Betty Hechtman


When a television crew descends on Tarzana, Molly Pink and the rest of her crochet group, the Tarzana Hookers, put up with the inconvenience as best they can--until the residence of one of their own becomes a real-life crime scene... The television crime show L.A. 911 has taken over Tarzana, making cinematic backdrops out of the town's most mundane locations, including the yard of Kelly Donahue, the newest member of the Tarzana Hookers. And at the end of the day, the TV shoot isn't all that's wrapped. It seems someone silenced Kelly--permanently--and no one heard a thing. Without any leads, Molly and her pals must stitch together the clues to catch the killer--before someone else dials 911. Delicious recipes and crochet patterns included About the Author: Betty Hechtman has a degree in fine arts and since college has studied everything from tap dancing to magic. When she isn't writing, reading or crocheting, she's probably at the gym. She lives in Southern California.

Many Rivers to Cross, Paperback/Peter Robinson

Avengers - Too Many Targets, CD-Audio/Dave Rogers