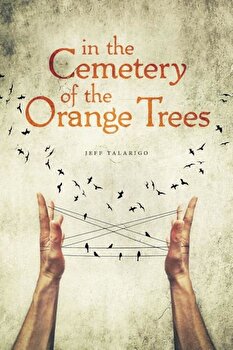 
``As much a book of poetry as a novel, as much a symphony as a memoir, this is an extraordinary book from a writer at the top of his powers. Reminiscent of Berger and Calvino, Jeff Talarigo manages to capture the breadth and circumference of story-telling, while also giving us a privileged insight into the daily life and dreams of Gaza.`` -- Colum McCann , Thirteen Ways of Looking In the mode of J. M. Coetzee's Waiting for the Barbarians and Italo Calvino's Invisible Cities , In the Cemetery of the Orange Trees engages poetic language, mythic themes, and childlike perspectives to offer an original approach to a conflict that has become hardened and polarized. These linked stories of an American's experience in Gaza expose the seven-decade long Palestinian diaspora in a disquieting allegory of the clash between the occupied and the occupier. In a place where political posturing, bloody war, journalistic witness, and even patient negotiation have yielded so little understanding, we enter the cemetery of the orange trees, where urchins kite dead birds, goats utter wisdom, camels and donkeys huddle together, and merchandise magically passes underground through the tunnels of Gaza. But this is no fairy tale or bestiary. In the Cemetery of the Orange Trees is a waking, attentive dream-journal, leading us back to a place where hatred, strife, and even human language itself might sing. Jeff Talarigo is the author of two novels: The Pearl Diver and The Ginseng Hunter . He has lived in Gaza and Japan, and currently resides in Oakland, California.