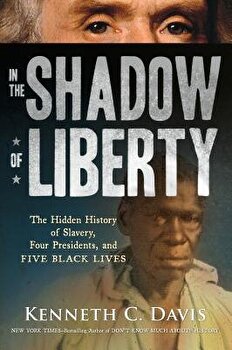 In the Shadow of Liberty: The Hidden History of Slavery, Four Presidents, and Five Black Lives, Paperback/Kenneth C. Davis


Description Did you know that many of America's Founding Fathers--who fought for liberty and justice for all--were slave owners? Through the powerful stories of five enslaved people who were "owned" by four of our greatest presidents, this middle-grade nonfiction book helps set the record straight about the role slavery played in the founding of America. From Billy Lee, valet to George Washington, to Alfred Jackson, personal manservant and lifelong slave of Andrew Jackson, these dramatic narratives explore our country's great tragedy--that a nation "conceived in liberty" was also born in shackles. These stories help us know the real people who were essential to the birth of this nation but traditionally have been left out of US history books. Their stories are true--and they should be heard. This thoroughly-researched and documented book by Kenneth C. Davis can be worked into multiple aspects of the Common Core curriculum. It is a great resource for young students of United States history. Praise for In the Shadow of Liberty "This well-researched book offers a chronological history of slavery in America and features five enslaved people and the four U.S. presidents who owned them.... A valuable, broad perspective on slavery." -- Booklist , starred review "Compulsively readable. . . . A must-have selection." -- School Library Journal , starred review About the author Kenneth C. Davis is the New York Times- bestselling author of America's Hidden History and Don't Know Much About (R) History , which gave rise to the Don't Know Much About(R) series of books for adults and children. A frequent guest on national television and radio and a Ted-Ed Educator, Davis enjoys Skype visits with middle- and high-school classrooms to discuss history. He lives in New York City.