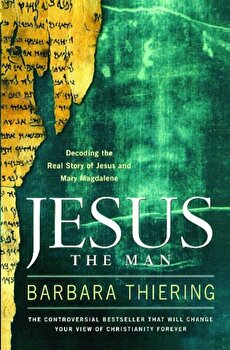 
Jesus was the leader of a radical faction of Essene priests. He was not of virgin birth. He did not die on the Cross. He married Mary Magdalene, fathered a family, and later divorced. He died sometime after AD 64. In this controversial version of Christ's life, theological scholar and bestselling author Barbara Thiering presents, after more than twenty years of close study of the Dead Sea Scrolls and the Gospels, a revolutionary theory that, while upholding the fundamental faith of Christianity, challenges many of its most ingrained supernaturalist beliefs. Jesus the Man will undoubtedly surprise those for whom a traditional understanding of biblical history is immutable and unchallengeable. But for the throngs who have been fascinated by new interpretations of this history, Thiering's work will be an essential and thrilling read.

Yes, There Is a God. . . and Other Answers to Life's Big Questions, Paperback/John Bergsma

Animals in Spirit: Our Faithful Companions' Transition to the Afterlife, Paperback/Penelope Smith

The Steampunk Tarot: Wisdom from the Gods of the Machine [With Cards], Paperback/John Matthews

Final Word: Why We Need the Bible, Hardcover/John MacArthur

How to See Yourself as You Really Are, Paperback/His Holiness the Dalai Lama

What Are We Waiting For': Finding Meaning in Advent & Christmas, Paperback/Richard Leonard

Laugh Your Way to a Better Marriage: Unlocking the Secrets to Life, Love, and Marriage, Paperback/Mark Gungor

Fundamentals of the Faith: Essays in Christian Apologetics, Paperback/Peter Kreeft