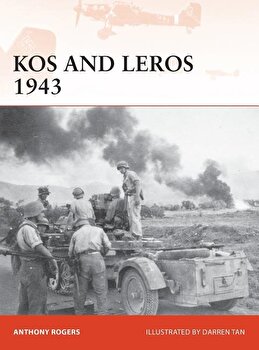 
Description An illustrated account of the disastrous British-led effort to occupy the Dodecanese in autumn 1943. This title is an illustrated account of the autumn 1943 battle for the Dodecanese, as Winston Churchill attempted to secure the Aegean islands in the wake of the Italian armistice. The occupation was a gamble intended to increase pressure against Germany and at the same time possibly provide encouragement for Turkey to join the Allies. Spearheaded by the Special Boat Squadron and the Long Range Desert Group, garrison troops were deployed to the Italian-occupied Dodecanese, but they were too late to prevent the Germans from taking control of the key island of Rhodes and its all-important airfields. An all-out German offensive followed. Air force and naval units supported a series of assaults by infantry and paratroopers, including specialist forces of the Division Brandenburg. Within three months, only Castelorizzo was still in British hands. Rhodes, Kos and Leros remained under German occupation until May 1945 and the end of the war in Europe. The Dodecanese would be Adolf Hitler's last enduring victory - and the last enduring British-led defeat. About the Author Anthony Rogers is an accomplished writer known for his meticulously researched books detailing events in an around the Mediterranean during World War II. Born and raised in Malaysia, Darren Tan grew up drawing spaceships, dinosaurs, and the stuff of his imagination, which was fueled by movies and computer games. Following a brief stint in 3D animation, Darren now works as a freelance illustrator.