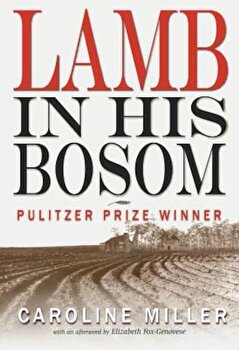 Lamb in His Bosom, Paperback/Caroline Miller


In 1934, Lamb in His Bosom won the Pulitzer Prize for Literature. It was the first novel by a Georgia author to win a Pulitzer, soon followed by Gone With the Wind in 1937. In fact, Lamb was largely responsible for the discovery of Gone With the Wind; after reading Miller's novel, Macmillan editor Harold S. Latham sought other southern authors, and found Margaret Mitchell. Miller was fascinated by the other Old South-the poor people of the south Georgia backwoods, who never owned a slave or planned to fight a war. The story of Cean and Lonzo, a young couple who begin their married lives two decades before the Civil War, this is a fascinating account of social customs and material realities among settlers of the Georgia frontier. At the same time, Lamb in His Bosom transcends regional history as Miller's quietly lyrical prose style pays poignant tribute to a woman's life lived close to nature-the nature outside her and the nature within.