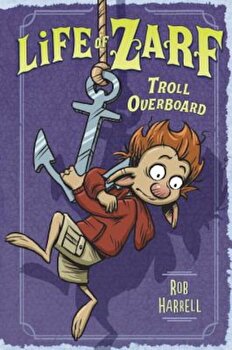 
Land of Stories meets Dork Diaries in the third book of the hilarious fractured fairy tale series about an unpopular troll and his underdog pals As a troll, Zarf is already at the bottom of the food chain when it comes to popularity at Cotswin Middle School. So when his Gramps shows up at career day, Zarf is sure his cool factor will hit an all-time low. What he doesn t expect is for the super-obnoxious Prince Roquefort to take an interest in Gramps s nautical know-how. Zarf is sure the prince is up to something . . . but why would he want Gramps to take him on a boat ride perilously close to the Berundi Rectangle? And why does he keep mumbling about magic beans? Award-winning comic creator Rob Harrell has cooked up another laugh-out-loud funny fairy-tale romp. Packed with witty one-liners and clever twists on fairy-tale tropes, this series is pure magic for fans of The Decedents .