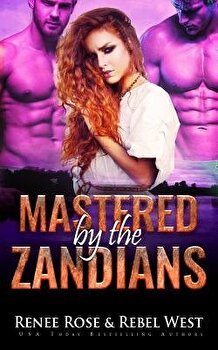 
Description TWO ZANDIAN WARRIORS. THEIR FEISTY HUMAN CAPTIVE. I can fly a fighter jet in my sleep and kill with the fingers of one hand. I work alone. No being in the galaxy can challenge me--until I tangle with two Zandian warriors. They say I stole their cargo, and they plan to take me to their planet. Make me theirs. Nobody owns me. I'm not going to let these Zandians master me, no matter how sexy and appealing they are. Because I have a secret mission. And if they find it out, my entire life could be over.My name is Mirelle, and this is my story. Publisher's Note: This book includes steamy scenes with two aliens males and one human female (no interaction between the males) and an out of this world happily ever after. No cheating, no cliffhangers.