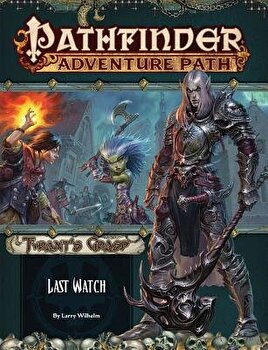 
Description Disaster Looms Over Vigil The heroes race to the crusaders in Vigil to warn them of the Whispering Tyrant's devastating new weapon. Amid a city-wide celebration, Vigil's leaders are disinclined to believe incredible tales from the frontier, so the heroes must uncover the conspirators who seek to engineer the city's destruction. At the center of these schemes is a gang of thieves whose long-ago heist has finally brought old enemies to light. Will the heroes assemble the clues in time to warn others of the doom that hangs over Vigil? This volume of Pathfinder Adventure Path continues the Tyrant's Grasp Adventure Path and includes: - "Last Watch," a Pathfinder RPG adventure for 8th-level characters, by Larry Wilhelm. - An examination of the life-hating threats that dwell in the void of the Negative Energy Plane, by Patchen Mortimer. - The secrets of the Seal-Breakers, a sect that strives to set the Whispering Tyrant free and break other seals that preserve reality, by Greg A. Vaughan. - A collection of relics-magic items that grow in power the more they are used in pursuit of a cause-from the glorious days of the Shining Crusade, by Alexander Augunas. - A bestiary of fearsome monsters, including a bestial humanoid tainted by undeath, an ersatz angel, swarms of noxious dragons, a flying beast from the Negative Energy plane, a reclusive plant-shepherd, and hordes of undead, by Mike Headley, Isabelle Lee, Meagan Maricle, Kendra Lee Speedling, and Larry Wilhelm.