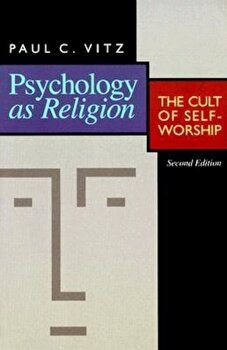 Psychology as Religion: The Cult of Self-Worship, Paperback/Paul C. Vitz


A trenchant analysis of modern psychology -- an enterprise that Paul Vitz maintains has become a religion, a secular cult of self, now part of the problem of modern life rather than part of its resolution. Virtually rewritten, this second edition of the original 1977 text takes into account much of what has happened in the field of psychology during the past seventeen years. Two completely new chapters are also included -- one on education and -values clarification- and the other on New Age religion.

The Psychology of Superheroes: An Unauthorized Exploration, Paperback/Robin S. Rosenberg

Everything Isn't Terrible: Conquer Your Insecurities, Interrupt Your Anxiety, and Finally Calm Down, Hardcover/Kathleen Smith

Coping with Loss: A Workbook of Activities in Resolving the Dissonances of Grief for Teenagers, Paperback/Joseph V. Palazzola

Sex Outside the Lines: Authentic Sexuality in a Sexually Dysfunctional Culture, Hardcover/Chris Donaghue

The Drama of the Gifted Child: The Search for the True Self, Hardcover/Alice Miller

It's Not about the Sex: Moving from Isolation to Intimacy After Sexual Addiction, Paperback/Andrew Susskind

Off the Tracks: Cautionary Tales About the Derailing of Mental Health Care Volume 1 Sexual and Nonsexual, Paperback/Jeffrey Berman