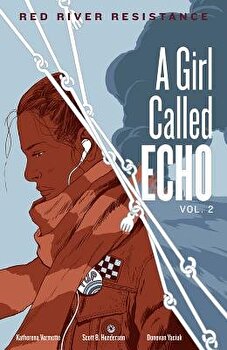 
Echo Desjardins is adjusting to her new home, finding friends, and learning about M tis history. She just can't stop slipping back and forth in time. One ordinary afternoon in class, Echo finds herself transported to the banks of the Red River in the summer of 1869. All is not well in the territory as Canadian surveyors have arrived to change the face of territory, and M tis families, who have lived there for generations, are losing access to their land. As the Resistance takes hold, Echo fears for her friends and the future of her people in the Red River Valley. About the Author: Katherena Vermette is a M tis writer of poetry, fiction, and children's literature. Her first book, North End Love Songs (The Muses' Company) won the 2013 Governor General Literary Award for Poetry. Her poetry and fiction have appeared in several literary magazines and anthologies, including Manitowapow: Aboriginal Writings from the Land of Water. Her first novel The Break is a National Bestseller and a 2016 Governor General's Literary Award Finalist. She holds a Master of Fine Arts from the University of British Columbia, and lives in Winnipeg, Manitoba. Scott Henderson has worked as an illustrator for comics, portraiture, and advertising art. He is author/illustrator of the sci-fi/fantasy comic, The Chronicles of Era and has illustrated two comics for the Canadian Air Force's For Valour series, the bestselling graphic novel series 7 Generations, selected titles from the Tales From Big Spirit series, and the graphic novels, Betty: The Helen Betty Osborne Story and Eisner-award nominee, A Blanket of Butterflies . Since 1998, Donovan Yaciuk has done colouring work on books published by Marvel, DC, and Dark Horse comics, honing his craft as a part of the legendary, now-defunct Digital Chameleon colouring studio. Donovan holds a Bachelor of Fine Arts (Honours) from the University of Manitoba. He lives in Winnipeg, MB Canada, with his wife and daughter.