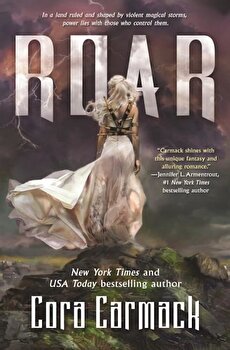 
Challenge a tempest. Survive it. And you become its master. Legend says that AuroraPavan's ancestors first gained their magic by facing a storm and stealing partof its essence. Aurora has been groomed to be the perfect queen...but she's yetto show any trace of the magic she'll need to protect her people. To keep her secret and save her crown, she'll have to marry a dark and broodingStormling prince from another kingdom: He'll guarantee her spot as the nextqueen and be the champion her people need to remain safe. But the more Aurora uncoversabout him, the more a future with him frightens her. When a handsome young storm hunter reveals he was born without magic, butpossesses it now, Aurora realizes there's a third option for her future besidesruin or marriage... She might not have magic now, but she can steal it if she's brave enough. "A rich and unforgettablefantasy forged from the power of storms, the danger of secrets, and the magicof Cora Carmack's imagination."--Kami Garcia, #1 New York Times bestselling author "Well worth the wait...Itcrushed all of my expectations with gusto, and surprised me more than once."-- Hypable