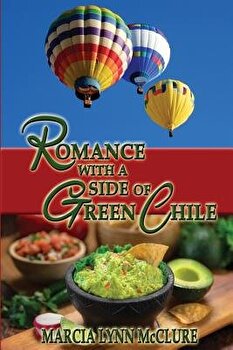 Romance with a Side of Green Chile, Paperback/Marcia Lynn McClure


Contributor(s): Author: Marcia Lynn McClure Excerpt: All at once, Talli felt the ball of her right foot catch on the pavement. As she stumbled forward, she tried to steady her footing, but it was too late. The downward slope of the paved path down to the field was just too steep, and she squealed a bit as she felt herself fall forward. As her stomach and chest collided with the ground, she felt her chin graze the pavement--felt her legs whip up over her back for a moment before she came to rest sprawled out like a cartoon character who had just hit a brick wall. "HeyAre you all right?" a deep voice asked. Still struggling to draw breath--the awful panic of having the air pushed so forcibly from her lungs threatening to shove her into hysterics--Talli nodded, gasping, "Yeah...yeah...I'm fine." "I don't think you're fine," the deep voice doubted. Then Talli felt strong hands assisting her to roll over onto her back, as several other passersby stopped, each asking, "Are you okay?" Talli's heart plunged to the bottom of her stomach. For as she found herself staring up into the gorgeous face of the hot Villarreal's burrito guy, she choked, "Hey...you're the Villarreal burrito boy." The handsome breakfast burrito maker smiled. "And you're the funnel cake girl, right?" "Yeah," Talli managed. "Are you sure you're okay?" the handsome man inquired.