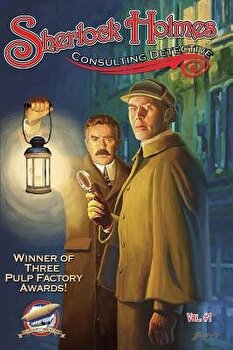 
Description Sherlock Holmes and Dr. Watson Victorian England, a time of historic significance as the world was poised expectantly for the coming wonders and terrors of the new century. Amidst this atmosphere of anticipation an dintrigue, one man emerged as a beacon of logic and cold, calculating reason in an unsettling time: R. Sherlock Holmes, Consulting Detective and his trusted friend and chronicler, Dr. John H. Watson. A famous soccer player is found dead in the clubhouse. An unidentified stowaway is murdered aboard a U.S. Navy warship while another man is found asphyxiated in an empty, locked room. These are several of the twisted puzzles challenging the Baker Street sleuth as he once again takes up the hunt on the fog-ridden streets of London accompanied by his faithful ally, Dr. Watson. Writers Aaron Smith, Andrew Salmon, Van Allen Plexico and Ian Watson have set forth exciting new mysteries done in the traditional style of the original Holmes stories as written by his creator, Sir Arthur Conan Doyle. There are no space aliens or howling werewolves here, simply good, old-fashioned whodunits. So arm yourself for danger and all manner of villainy as once agin, the game is afoot