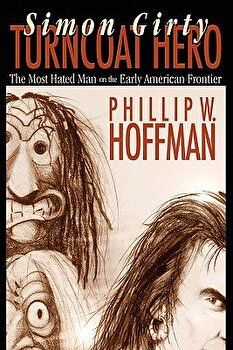 
Contributor(s): Author: Phillip W. Hoffman Simon Girty Turncoat Hero: The Most Hated Man on the Early American Frontier by Phillip W. Hoffman The subject of this panoramic biography is one of the most mysterious, misunderstood icons of early American history. Simon Girty was a sharp-witted, rascally, many-tongued frontiersman whose epic adventures span the French and Indian War, Dunmore's War, the American War for Independence, the Indian Wars, and the War of 1812. After defecting from the Patriot cause to serve the British in March 1778, Girty achieved instant infamy. To understand his motivation one must discover, as he did, that the real, underlying cause of the American Revolution was the unquenchable thirst for Indian land of many of our so-called founding fathers - including George Washington - and their unrelenting dissatisfaction with the restrictions imposed upon their land speculation ambitions by the King's Proclamation of 1763. Like a detective doggedly combing through old evidence, author Phillip Hoffman spent seventeen years studying every detail of Girty's life. By exploring microfilm, ledgers, military records, congressional records, newspaper and magazine articles, and dozens of early American and Canadian fiction and non-fiction works, Hoffman was able to peel away the mythic legend that has hidden Girty's real persona for two and a half centuries. Little in Simon Girty's life was conventional or predictable. Raised by an Irish Indian trader who had settled near Harrisburg, Pennsylvania, Simon's earliest experiences quickly isolate him from the majority of the colonists in the region. During the French and Indian War, Simon and his family are captured by hostile Indian warriors, and Simon is carried north and adopted, emerging eight years later as a gifted linguist and a trained interpreter fluent in eleven native languages. Girty begins his career as a spy-interpreter-intermediary, serving both English and Native American leaders. Girty's contacts include the great Seneca sachem Guyasuta, Sir William Johnson, merchant George Morgan, businessman John Connolly, William Crawford, Matthew Elliott, Lord Dunmore, Simon Kenton, and George Rogers Clark. He also interacted with Mingo chief John Logan, Mohawk chief Joseph Brant, Half King of the Wyandots, Captain Pipe of the Delawares, Moravian missionaries David Zeisberger and John Heckewelder, Shawnee chiefs Blue Jacket and Tecumseh, Miami war chief Little Turtle, Detroit Governor Henry Hamilton, U.S. general Anthony Wayne, and Daniel Boone. Through Girty's eyes we relive the ill-fated Squaw Campaign, his rescue of Simon Kenton, the deadly ambush of Rogers' Flotilla, the Battle of Sandusky, William Crawford's trial and death by fire, the conquest of Martin's and Ruddle's Stations, the disastrous American defeat at Blue Licks, and the incredible victories over Harmar and St. Clair by a confederation of Western and Northern Tribes. Finally, with Girty and his companions Alex McKee and Matthew Elliott, we witness the climactic defeat of the Indians by "Mad" Anthony Wayne at Fallen Timbers. Hoffman's dedication to detail, combined with his superb talent as a storyteller, brings us an intimate view of the full sweep of early American frontier conflicts, as experienced by a devoted adventurer whose heart was as much Indian as it was white. The author's erudite, yet accessible style makes this book a pleasure to read and savor. Simon Girty Turncoat Hero is American history at its best.