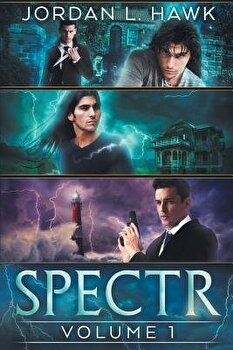 
Includes: Hunter of Demons Master of Ghouls Reaper of Souls What happens when an exorcist falls in love with the demon he's supposed to destroy? Unregistered paranormal Caleb Jansen only wants a normal life. But when a demon murders his brother, Caleb must avenge Ben's death, no matter what the cost. Unfortunately, his only allies belong to an extremist group who would kill Caleb if they found out about his talent. Gray is a wandering spirit, summoned to hunt and destroy demons by drinking their blood. This hunt goes horribly wrong, and for the first time in his existence Gray is trapped in a living, human body. Caleb's body...and Caleb is still in it. Hotshot federal agent John Starkweather thinks he's seen it all. But when he's called to exorcise Caleb, he finds a creature which isn't supposed to exist outside of stories. For Gray is a drakul: a vampire. When John fails to exorcise Gray, the countdown is on. If he can't find a means of removing the drakul before 40 days pass, Caleb will be possessed forever. In the meantime, the three must find a way to work together. As they hunt down demons and save the innocent, the heat between the two men explodes into passion...and John discovers a different kind of temptation, one that calls into question everything he believes.