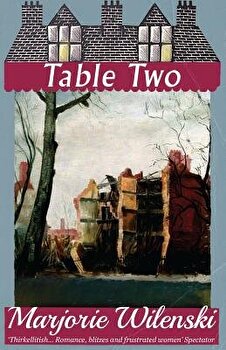 
"It's awful to think that there are nine of us here to-day at this table and in six months' time we may all be dead," said Miss Purbeck. "There were thousands killed last night, so the bus conductor told me." "You certainly are our little ray of sunshine," said Elsie scornfully. Marjorie Wilenski's only novel, as biting and funny as Barbara Pym at her crankiest, follows an office of women translators at the fictional Ministry of Foreign Intelligence in London as they bicker, manoeuvre, and shift allegiances just before and then in the thick of the London Blitz. Its two main characters are sharply contrasted--the clever, efficient but terminally bitter middle-aged Elsie Pearne and the cheerful, pretty young newcomer Anne Shepley-Rice, whose once affluent family has fallen on hard times. Their colleagues include a fresh air fanatic, a busybody, an inept supervisor and her trusty deputy, the dithering, chatty Mrs Jolly, and a former lady's companion who delights in bad news and disaster. The cast of Table Two are instantly recognizable to any office worker of today. But this portrayal of a 1940s office is a rare treasure for modern readers, showing, with vivid detail and dark humour, how a group of independent, capable women experienced some of the darkest days of World War II. 'The most striking novel about women war workers this war has produced' Elizabeth Bowen