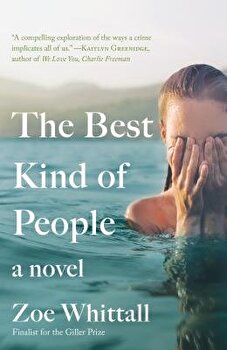 
A local schoolteacher is arrested, leaving his family to wrestle with the possibility of his guilt, in this exquisite novel about loyalty, truth, and happiness. The Woodburys cherish life in the affluent, bucolic suburb of Avalon Hills, Connecticut. George is a beloved science teacher at the local prep school, a hero who once thwarted a gunman, and his wife, Joan, is a hardworking ER nurse. They have brought up their children in this thriving town of wooded yards and sprawling lakes. Then one night a police car pulls up to the Woodbury home and George is charged with sexual misconduct with students from his daughter's school. As he sits in prison awaiting trial and claiming innocence, Joan vaults between denial and rage as friends and neighbors turn cold. Their daughter, seventeen-year-old Sadie, is a popular high school senior who becomes a social outcast--and finds refuge in an unexpected place. Her brother, Andrew, a lawyer in New York, returns home to support the family, only to confront unhappy memories from his past. A writer tries to exploit their story, while an unlikely men's rights activist group attempts to recruit Sadie for their cause. Provocative and unforgettable, The Best Kind of People reveals the cracks along the seams of even the most perfect lives and the unraveling of an American family. GILLER PRIZE FINALIST - NAMED ONE OF THE BEST BOOKS OF THE YEAR BY THE NEW YORK POST "A compelling exploration of the ways a crime implicates all of us." --Kaitlyn Greenidge, author of We Love You, Charlie Freeman "I am obsessed with this book." --Samantha Irby, author of We Are Never Meeting in Real Life "In our post-Harvey Weinstein world this book] feels more timely and urgent than ever. . . . It draws an elegant line between rape culture, patriarchy, and privilege." --Claire Cameron, The Millions "Every character is fully rounded, flawed, and achingly human. It puts me in mind of a twenty-first-century Ordinary People ." -- Kate Harding, author of Asking for It "Sure to provoke debate and send book discussion groups into overtime." -- Library Journal (starred review) "A powerful page-turner." -- Cosmopolitan About the Author: Zoe Whittall 's The Best Kind of People was a bestseller in Canada. Her debut novel, Bottle Rocket Hearts, was named one of The Globe and Mail 's Top 100 Books of the Year and CBC Canada Reads' Top Ten Essential Novels of the Decade. Her second novel, Holding Still for as Long as Possible, won a Lambda Literary Award and was an American Library Association Stonewall Honor Book. She was awarded the K. M. Hunter Artist Award for Literature in 2016. Her writing has appeared in The Walrus, The Believer, The Globe and Mail, National Post, Fashion, and more. She has also worked as a writer and story editor on television shows such as Degrassi, Schitt's Creek, and Baroness von Sketch Show . Born in the Eastern Townships of Quebec, she has an MFA from the University of Guelph and lives in Toronto.