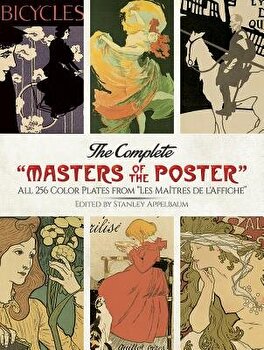 
Les Maitres de l'Affiche (The Masters of the Poster) is one of the most prestigious and influential art publications in history. Its 256 color plates have preserved for each succeeding generation a wide- ranging selection of outstanding posters from the turn of the century, when the popular art form had reached its first peak. This Dover edition is the first complete republication of the legendary Maitres set to devote a full large page to each plate. Les Maitres de l'Affiche was issued as separate numbered sheets measuring 11 1/4 x 15 1/2 inches. Every month for 60 months, from December 1895 through November 1900, subscribers received a wrapper containing four consecutively numbered poster reproductions. On 16 occasions, the monthly wrapper also contained a bonus plate, not a poster reproduction but a specially created art lithograph. Jules Cheret, father of the modern poster, emerged with the lion's share of the plates, 60 of the 240 numbered poster reproductions and 7 of the 16 unnumbered bonus plates. Of the 97 artists represented in Les Maitres de l'Affiche , some were preeminent painters and printmakers at various stages of their careers: Toulouse-Lautrec, Denis, Bonnard, Vallotton, Puvis de Chavannes. Others were famous illustrators and cartoonists of the period, still well known to art collectors and bibliophiles: Forain, Caran d'Ache, Ibels, Willete, Boutet de Monvel, Leandre. But there were also all those whose names say ``poster,`` the conquering pioneers of the new medium: Cheret himself, Mucha, Steinlen, the Beggarstaffs, Grasset, Penfield, Parrish, Bradley, and Hardy. This edition reproduces the plates in their original numerical sequence, one to a page, retaining the standardized tan border introduced by the editors of Les Maitres . The bonus plates, originally unnumbered and issued at various times, have been given the letters A through P and have been placed at the end of the volume. The List of Plates indicates the exact months in which Maitres subscribers received these bonus plates. In order to keep the plate pages uncluttered, the captions on those pages have been limited to plate number (or letter) and the artist's name. The List of Plates also furnishes essential data on the original full-sized posters: their dimensions, the year in which they were first published, city of publication, and specific print shop responsible. A special Dover feature, which is almost certainly a first ever, is a full literal translation of the text of all posters printed in a language other than English. These are all new direct translations from French, German, Italian, Spanish, Dutch, Danish, Czech, and Hungarian.

Laughter Still Is the Best Medicine: Our Most Hilarious Jokes, Gags, and Cartoons, Paperback/Editors of Reader's Digest

Point Your Face at This: Drawings, Paperback/Demetri Martin

If You Didn't Bring Jerky, What Did I Just Eat': Misadventures in Hunting, Fishing, and the Wilds of Suburbia, Paperback/Bill Heavey

200 Skills Every Fashion Designer Must Have: The Indispensable Guide to Building Skills and Turning Ideas Into Reality, Paperback/Aisling McKeefry

How Not to Be a Dick: An Everyday Etiquette Guide, Hardcover/Meghan Doherty

Based on a True Story: Not a Memoir, Paperback/Norm MacDonald

Don't Squat with Your Spurs on: A Cowboy's Guide to Life, Paperback/Texas Bix Bender