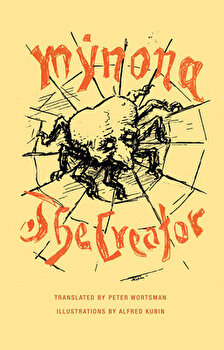 
Billed by its author--the pseudonymous Mynona (German for "anonymous" backward)--as "the most profound magical experiment since Nostradamus," The Creator tells the tale of Gumprecht Weiss, an intellectual who has withdrawn from a life of libertinage to pursue his solitary philosophical ruminations. At first dreaming and then actually encountering an enticing young woman named Elvira, Weiss discovers that she has escaped the clutches of her uncle, the Baron, who has been using her as a guinea pig in his metaphysical experiments. But the Baron catches up with them and persuades Gumprecht and Elvira to come to his laboratory, to engage in an experiment to bridge the divide between waking consciousness and dream by entering a mirror engineered to bend and blend realities. Mynona's philosophical fable was described by the legendary German publisher Kurt Wolff as "a station farther on the imaginative train of thought of Hoffmann, Villiers, Poe, etc.," when it appeared in 1920, with illustrations by Alfred Kubin (included here). With this first English-language edition, Wakefield Press introduces the work of a great forgotten German fabulist. Mentioned in his day in the same breath as Kafka, Mynona , aka Salomo Friedlaender (1871-1946), was a perfectly functioning split personality: a serious philosopher by day (author of Friedrich Nietzsche: An Intellectual Biography and Kant for Children ) and a literary absurdist by night, who composed black humored tales he called Grostesken . His friends and fans included Martin Buber, Walter Benjamin and Karl Kraus.