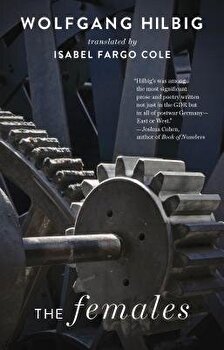 
Description From award-winning author-and-translator combination Wolfgang Hilbig and Isabel Fargo Cole What can an irascible East German tell us about how society shapes relations between the sexes? A lot it turns out. Acclaimed as one of Wolfgang Hilbig's major works, The Females finds the lauded author focusing his labyrinthine, mercurial mind on how unequal societies can pervert sexuality and destroy a healthy, productive understanding of gender. It begins with a factory laborer who ogles women in secret on the job. When those same women mysteriously vanish from their small town, the worker sets out on a hallucinatory journey to find them. Powerful and at times disturbing, The Females leaves us with some of the most challenging, radical, and enduring insights of any novel from the GDR. About the Author Wolfgang Hilbig (1941-2007) was one of the major German writers to emerge in the postwar era. Though raised in East Germany, he proved so troublesome to the authorities that in 1985 he was granted permission to emigrate west. The author of over 20 books, he received virtually all of Germany's major literary prizes, capped by the 2002 Georg Büchner Prize, Germany's highest literary honor. Isabel Fargo Cole is a U.S.-born, Berlin-based writer and translator. Her translations include Boys and Murderers by Hermann Ungar (Twisted Spoon Press, 2006), All the Roads Are Open by Annemarie Schwarzenbach (Seagull Books, 2011), The Jew Car by Franz Fühmann (Seagull Books, 2013), and The Sleep of the Righteous by Wolfgang Hilbig. The recipient of a prestigious PEN/Heim Translation Grant in 2013, she is the initiator and co-editor of No-mans-land.org, an online magazine for new German literature in English.