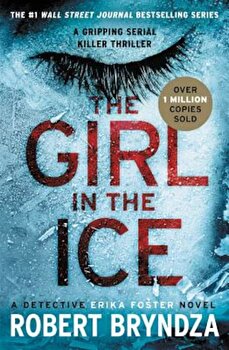 The Girl in the Ice, Paperback/Robert Bryndza


OVER 1 MILLION COPIES SOLD #1 WALL STREET JOURNAL BESTSELLING SERIES "Compelling at every turn The Girl in the Ice grabs us from the first page and simply won't let go." -- Jeffery Deaver, #1 internationally bestselling author Her eyes are wide open. Her lips parted as if to speak. Her dead body frozen in the ice...She is not the only one. When a young boy discovers the body of a woman beneath a thick sheet of ice in a South London park, Detective Erika Foster is called in to lead the murder investigation. The victim, a beautiful young socialite, appeared to have the perfect life. Yet when Erika begins to dig deeper, she starts to connect the dots between the murder and the killings of three prostitutes, all found strangled, hands bound and dumped in water around London. What dark secrets is the girl in the ice hiding? As Erika inches closer to uncovering the truth, the killer is closing in on Erika. The last investigation Erika led went badly wrong... resulting in the death of her husband. With her career hanging by a thread, Erika must now battle her own personal demons as well as a killer more deadly than any she's faced before. But will she get to him before he strikes again? "A riveting page-turner. An astonishingly good plot with perfectly drawn characters and sharp, detailed writing. The Girl in the Ice is a winner." -- Robert Dugoni , #1 Wall Street Journal bestselling author