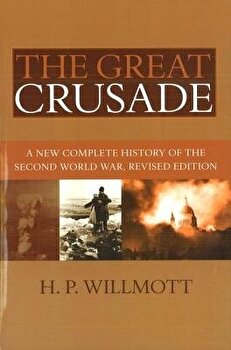 
"The best balanced one-volume history of the Second World War in its coverage of all the major themes and all the fronts. Willmott's fresh insights into the war on the Eastern Front are an outstanding feature." --Russell F. Weigley, author of Eisenhower's Lieutenants: The Campaign of France and Germany, 1944-45 " The Great Crusade is a single-volume tour de force combining narrative, interpretation, and insight. Willmott has written both an outstanding operational history and a perceptive analysis of systems and societies in mortal conflict." --Dennis E. Showalter, author of Patton and Rommel: Men of War in the Twentieth Century "One of the best one-volume histories of World War II. . . . Thorough in its coverage, entertaining in its treatment, and perceptive in its analyses. . . . Exceptionally readable." --Sea Power Originally published in 1989 to commemorate the fiftieth anniversary of the war's outbreak in Europe, the highly acclaimed The Great Crusade: A New Complete History of the Second World War, Revised Edition , provides a balanced account of both theaters of conflict in World War II and asserts that modern war is waged between systems and societies rather than among individuals. In this new revised edition, author H. P. Willmott provides a general overview of military events and relates them to political and economic factors, establishing a balance among the warring nations in terms of the conflict's causes and its course of victory and defeat. The Great Crusade includes detailed analyses of the Soviet side of the conflict and offers comparisons between the American Civil War and the Pacific theater to explain Japan's defeat. Willmott debunks the myth of German military proficiency, asserting that the German military was better at winning individual battles than waging war, thus resulting in its defeat. With its clear discussion of events, controversial interpretive frameworks, and new introduction, The Great Crusade is a well-written and engaging narrative history that will appeal to military buffs and scholars alike.