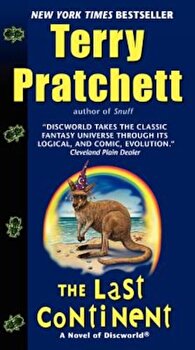 
There's big trouble at the Unseen University, Ankh-Morpork's lone institute of higher learning. A professor is missing--and the one person who can find him is not only the most inept magician the school ever produced, but currently stranded on the unfinished down-under continent of Fourecks. As the UU faculty tries to bring him back, Rincewind is having troubles of his own, thanks to a pushy mystical kangaroo trickster named Scrappy and a mob of Fourecks hooligans who are out to hang him. All his problems would be solved if he could just make it rain . . . for the first time ever. And if the time-traveling professors can get to the right millennium . . .