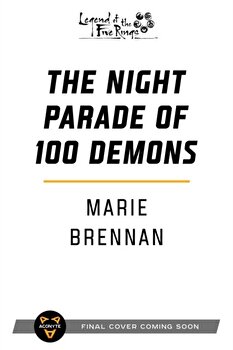 
A thrilling epic fantasy adventure in the astonishing realm of Legend of the Five Rings, as two rival clans join forces to investigate a lethal supernatural mystery Chaos has broken out in the isolated Dragon Clan settlement of Seibo Mura. During the full moon, horrifying creatures rampage through the village, unleashing havoc and death. When the Dragon samurai Agasha no Isao Ryotora is sent to investigate, he faces even greater danger than expected. To save the village, he must confront his buried past - not to mention an unexpected Phoenix Clan visitor, Asako Sekken, who has his own secrets to hide. The quest to save Sebo Mura will take the two samurai into the depths of forgotten history and the shifting terrain of the Spirit Realms... and bring them face to face with an ancient, terrifying evil. About author(s): MARIE BRENNAN is the World Fantasy and Hugo Award-nominated author of several fantasy series, including the Memoirs of Lady Trent, the Onyx Court, the Wilders series, the Doppelganger duology, the Varekai novellas, and nearly sixty short stories.