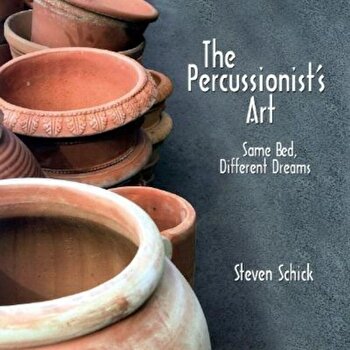 
In the beginning there was noise. Drumming, the world's most ancient instrumental tradition, re-emerged explosively in the concert music of the twentieth century as music for percussion, involving drums and many other kinds of noisemakers. The music that resulted has spanned an expressive and intellectual gamut: from Cage, Varese, and Cowell came the first ear-splitting sounds of an American percussion revolution that began in the 1930s; from Stockhausen, Ferneyhough, and Xenakis we have music whose intellectual demands are matched by a vibrant physicality; Feldman gave us gently unfolding structures; John Luther Adams finds music within the earth itself. The Percussionist's Art: Same Bed, Different Dreams examines this music through the eyes of a performer. The book is a practical philosophy, looking not just at the big ideas behind these and other pieces, but also at how those ideas find expression in sound. Foreword written by Paul Griffiths. Contains a Compact Disc of Steven Schick performing eight musical works that he discusses in detail in the book. Composers include John Luther Adams, Brian Ferneyhough, Michael Gordon, David Lang, Edgard Varese, Charles Wuorinen, and Iannis Xenakis. Steven Schick is the world's leading exponent of solo percussion music involving multiple instruments. He has commissioned more than one hundred pieces from renowned composers including David Lang, Brian Ferneyhough, and Roger Reynolds. He was a founding member of the Bang on a Can All-Stars (1992-2002) and Artistic Director of the Centre International de Percussion de Geneve (Switzerland, 2002-4). He teaches at the University of California, San Diego, where he directs the percussion group "red fish blue fish."